Why Happiness Leads To Weight Loss

It’s no secret that feeling sad can drive our impulsive choices — usually in the wrong direction. Hence the stereotypical pairing of articles about heartbreak + photos of empty Ben & Jerry’s cartons.

But does happiness lead to weight loss? Do you think that happiness can drive our choices in the right direction? Researchers at the University of Utah think so.

According to their study, people may be less likely to choose impulsively if they have higher brain levels of serotonin, the “happiness chemical.”

The study showed that tryptophan/serotonin had a moderating effect on both “impulsive choice” (the immediate need to acquire something without thought for the consequences) and “impulsive response” (being unable to resist, even if one is aware of the consequences).

What This Means for Our Waistlines 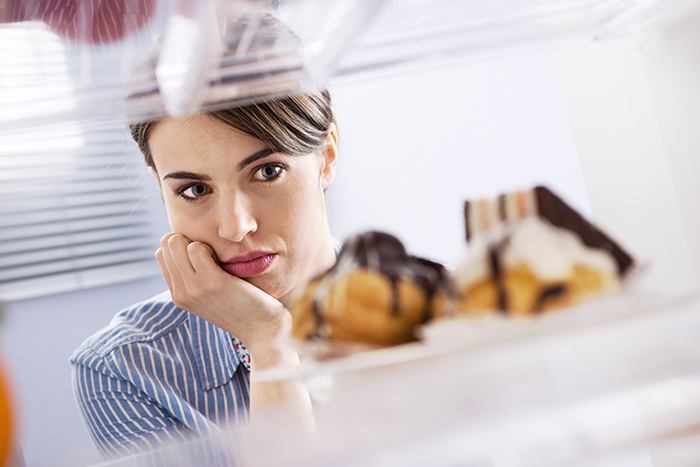 Heaven knows, impulsive choice and impulsive response are BOTH at play in some of our unhealthy food choices. Raise your hand if you’ve ever thrust your fist into a bag of cookies faster than you could blink an eye — let alone turn that eye toward the nutrition label.

And raise your hand again if you did stop, consider the ingredients, and proceed like Cookie Monster to eat half the bag.

Many people are aware that they sometimes feel “out of control” when it comes to food. So consuming foods that alter serotonin levels might help us to better regulate our behavior.

It might be especially beneficial if you have an impulsive personality (I definitely do), which makes a person more susceptible to a food addiction. Impulsive people are more responsive to serotonin’s moderating effects, the study authors say. There is hope! 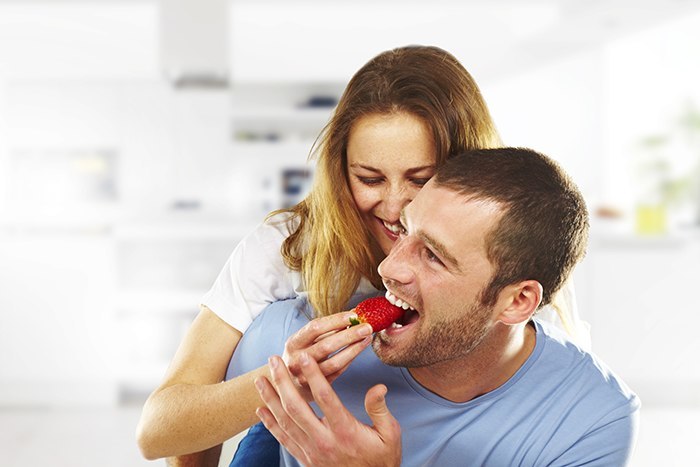 Beyond impulsive personality traits, there are countless factors that dampen our ability to make healthy food choices.

Take restaurant environmental cues (e.g., huge plates and portions combined with freeeezing temperatures). Or our tendency to pig out when the TV is on.

And then there’s “smellvertising” (yes, burger joints actually pump artificial scents into the air to tease your nostrils). A serotonin boost could be our antidote against these silent saboteurs.

It’s not just food choices that are affected by willpower: the University of Utah study tested impulsive response in general, and found improved ability to “stick to your guns” with increased serotonin levels. So if you’re happier, you might be more likely to stick to your gym plans despite an invite from friends, or to forgo a late-night Netflix marathon in favor of a good night’s rest. 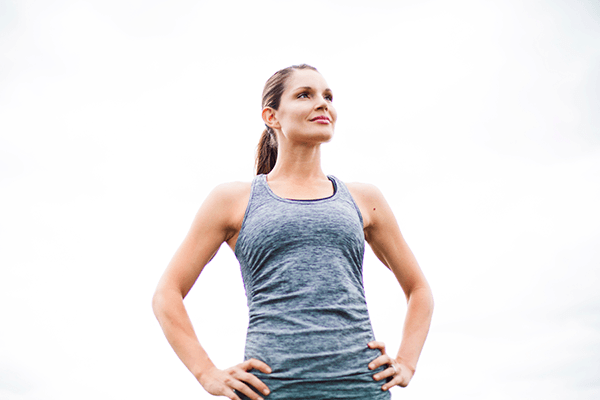 Before you rush out and gobble turkey at every meal, there is some controversy around this theory. In a comprehensive article about serotonin published in the Journal of Psychiatry & Neuroscience, the author asserts that foods containing serotonin don’t cross the blood-brain barrier.

“Although purified tryptophan increases brain serotonin, foods containing tryptophan do not,” he says. “The idea, common in popular culture, that a high-protein food such as turkey will raise brain tryptophan and serotonin is, unfortunately, false.” 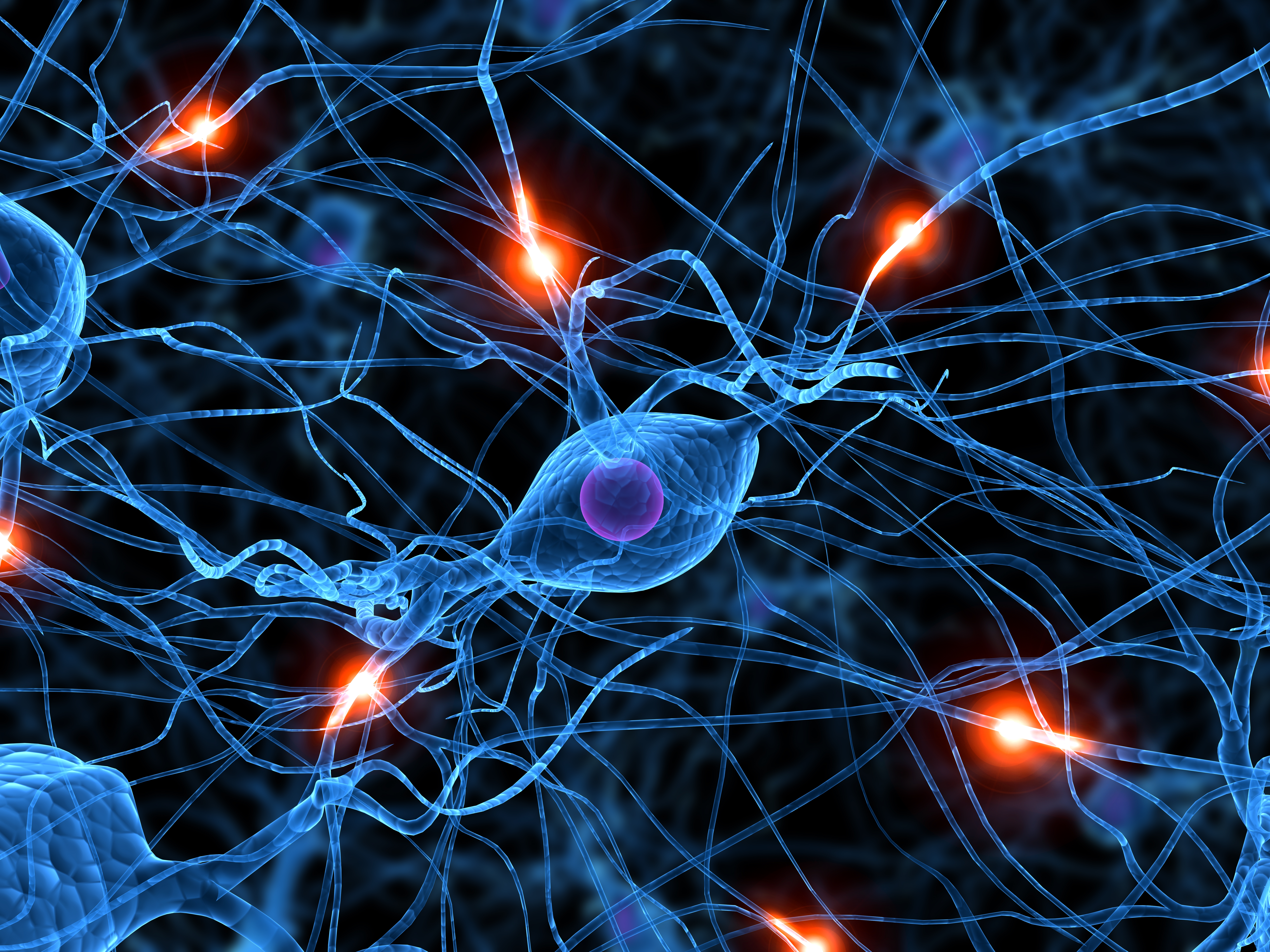 Nerve cells in the brain

Nonetheless, serotonin could still be a boon for weight loss. Even if tryptophan-rich foods don’t alter our serotonin levels in the brain, other things might — the neuroscientists doing the study listed several, including exercise.

What’s more, regardless of whether any of this affects our impulsiveness, there’s a clear connection between feeling happy and making healthy choices.

When we feel happy, we tend to have higher self-regard and a drive toward self-preservation (as opposed to self-sabotage). We’re also less likely to hunt down high fat or high sugar for a quick mood fix.

Finally, a longer-term feeling of well-being often helps us to see ourselves as people who make good choices — it becomes part of our identity.

Not All Impulses are Bad, Either

When healthy behavior is our M.O., it’s ingrained in our minds to the point that, if we do react impulsively, those impulses are likely to be good ones. So whether you load up on tryptophan-rich foods, boost serotonin with exercise or get to work on your identity, all can help increase your feeling of happiness — which, in turn, should be great for keeping your hand out of the cookie jar. If you are struggling, why not change the contents of your cookie jar? You could try some of our shakes.

How you can enjoy Easter without ruining your weight loss

Meal Replacement Shake vs Protein Shake: Which One…

No Whey! Why protein is your secret weight loss…